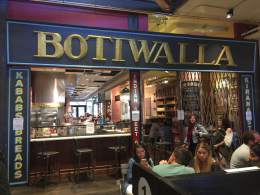 Fathers, mothers and grandmothers still figure in the new wave of Indian restaurants showing up around metro Atlanta. But family tradition is a touchstone rather than a millstone, nowadays. And please don’t bring up those bad old memories of face-stuffing buffets set to wailing sitar soundtracks, or you just might elicit a bout of laughter mixed with embarrassment.

What you’ll find at Bhojanic in Buckhead and Chai Pani in Decatur are creative takes on Indian food that offer brighter, fresher flavors in varied portion sizes, all kinds of current beer, wine and cocktail options, and settings that are decidedly contemporary.

Indian with a difference

Archna Becker opened her second Bhojanic location in the Shops Around Lenox a little more than a month ago. The menu, the same as you’ll find at her original restaurant in Decatur, is the first thing that distinguished Bhojanic when it opened some eight years ago, with a selection of small plate “Indian tapas” designed for sampling and sharing.

“The main thing I hated was that you had to buy a lot of large portions,” Becker says of more typical Indian restaurants of the time. “You either ate at a nasty buffet or you ended up buying $200 worth of food and eating it all week.”

Specialty cocktails, wine and draft craft beer, and an energetic atmosphere, often punctuated with the sounds of live jazz, underscore that this is Indian with a difference.

“I took my family’s food, my grandmother’s food, my dad’s food, and presented it in a different manner,” Becker says. “Our thing is traditional food in a nontraditional atmosphere. We don’t change the recipes. We make alu gobi the way my grandmother makes it.”

Becker’s disdain for old school Indian restaurants is what compelled her to get into the business, starting with a catering company, then a small shop at Emory, before finally coming up with the full-blown Bhojanic concept.

Becker’s other guiding principle is hospitality, which she defines as treating customers with respect.

“We don’t think our customers are dumb,” she says. “We’re not the stereotypical place, where the guest is doing a favor by being there. That makes me cringe. We appreciate our guests coming in. They’re the reason we’re there.”

In Buckhead, the design includes a trellis-covered entryway patio, an open dining room and a roomy L-shaped bar, all accented with a bazaar of dangling lights, pillows and curtains fashioned with Indian fabrics.

Every Wednesday, Thursday and Friday, the restaurant hosts the get-happy “Khush Time” with food specials and live music.

“It’s been a great first month,” Becker says. “It’s been very, very busy. It took us seven years at the other one to get that busy.”

A friendly tug of war

That means sourcing produce from local purveyors and farmers and making their own spice blends, chutneys and sauces. That good stuff shows up in dishes like okra fries tossed in lime and spices, a Sloppy Joe take, “Sloppy Jai,” with spiced lamb hash, and even cocktails such as a whiskey sour mixed with fresh lime and Kashmiri chili powder.

Irani, who grew up near Mumbai and learned to cook from his mother, came to the U.S. to earn an MBA, then worked in sales and marketing before opening the original Chai Pani in Asheville, N.C.

Peach, a young, blond-haired, blue-eyed South Carolina native who is fluent in Hindi, immersed himself in Indian cuisine by living, studying and cooking all over India, including in Irani’s mother’s kitchen.

Together, Irani and Peach are offering another generation’s side of the ongoing argument over what constitutes “authentic” Indian cuisine, drawing on its Portuguese and Iranian influences, and refining dishes with classic French techniques.

“For a long time, Indian food was stuck in the same place that Italian food was 20 or 30 years ago,” Irani says. “Most people thought of Italian food as pasta and some sort of red sauce. The Indian equivalent of that is naan and tandoori chicken.”

Like many Americans, Peach’s intro to Indian food was in a buffet line. But his time in India opened his eyes and quickly reset his palate.

“Indians are very quick to adopt a new thing and turn it into something uniquely Indian and make it work,” Peach says. “It’s like MacGyver. That really happens a lot with food. In Bombay (now known as Mumbai), you can get a griddled version of a club sandwich on white bread with chutneys and a potato patty. To me, it’s almost more uniquely Indian than rice and lentils, because it embodies that spirit.”

Irani and Peach like to give the MacGyver treatment to Southern staples, adding Indian spice to shrimp and grits or fried green tomatoes, or making kale pakoras or roasted sweet corn bhel.

“We’re not Americanizing Indian food,” Irani insists. “If anything, we’re Indianizing a lot of American ideas and concepts. That’s in the true spirit of what India is.

“It may seem to some people that we’re taking Indian food and sort of curating it in a trendy, hip fashion. But there are super hip, cool restaurants in India now. There’s an entire generation, millions upon millions of people, that have grown up with a very Western sensibility.”

For that reason, reactions to the Chai Pani menu tend to be generational, Irani says. “Older Indians come in and they love my grandma’s dal. At the same time, young Indians who have grown up with Western pop culture come in and love what we’re doing with our cocktails or our kale pakoras.”

But even in the Chai Pani kitchen, Irani and Peach sometimes engage in a friendly tug of war, drawing the line between tradition and innovation.

“It’s a funny juxtaposition,” Irani says. “Daniel’s immersion in India as a Westerner really made him more of a traditionalist. Going to India was a revelation where he really embraced it and wanted to come back and represent the villages and the countryside and the real food. I’m constantly trying to push the envelope on traditional Indian food. Chai Pani is what it is because of that.”