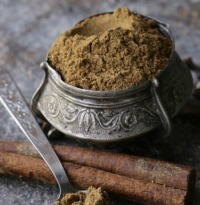 Dhansak masala might seem tedious at first glance but is totally worth the effort! It’s a popular dish of the Parsi Zoroastrian community and combines elements of Persian and Gujarati cuisine.

Grind all the ingredients together.

Store in an airtight container.