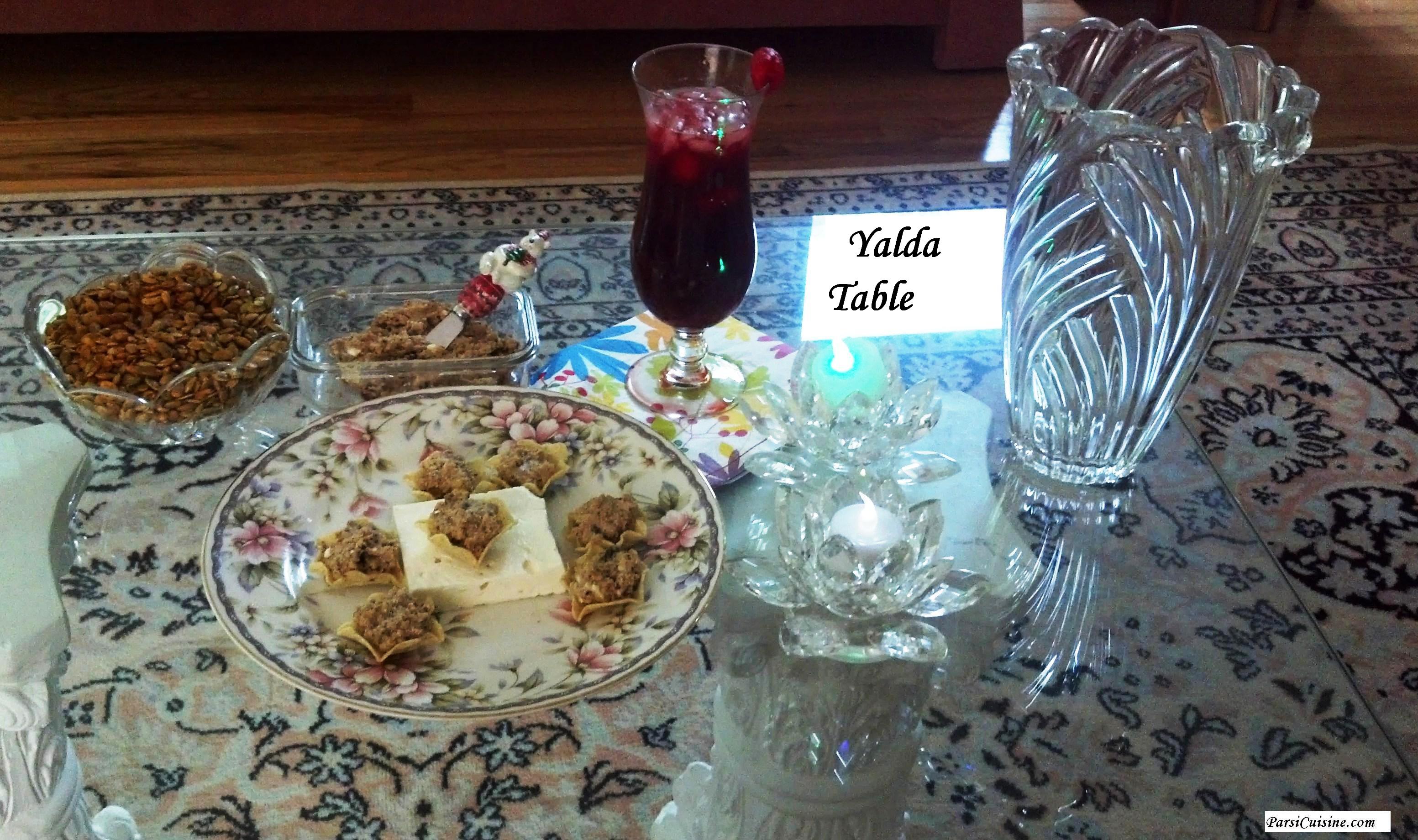 Yalda on December 21 is celebrated in many parts of the world. Eating watermelon in the winter is believed to keep you healthy in the new year. Watermelon seeds are one of the items in the health food – parsi vasanu and the gujarati word is “char jat nu magaj”.

Everywhere in the world, people observe various seasonal days of celebration during the month of December. Most are religious holy days and are linked in some way to the winter solstice in the Northern Hemisphere. Yalda, an ancient Iranian Festival, is celebrated on the eve of the winter solstice and goes several thousand years back in the country’s history. The tradition originated from the Mithraism religion. “Yalda” is a Syriac word meaning birth, and it was believed that Mithra, the Persian angel of light, was born during that night, which was then called Yalda.

Yalda is  a Syric word imported into the Persian language by the Syric Christians. Early Christians linked this very ancient Persian celebration to Mithra, goddess of light, and to the birth anniversary of Prophet Jesus. Ancient Iranian Zoroastrians believed that on December 21 darkness is defeated by light. On this night, family and friends get together. Dried nuts, watermelon and pomegranate juices and delicious snack are served. Classic poetry and old mythologies are read aloud.

As the longest night of the year, the Eve of Yalda (Shab-e Yalda) on December 21 is also a turning point, after which the days grow longer. It symbolizes the triumph of Light and Goodness over the powers of Darkness. During this night, Iranian Americans, along with Iranians around the globe, hold gatherings and stay up late, eating pomegranate, watermelon and a variety of nuts. They also read poetry, especially by the poet Hafez, who is a highly respected and adored 14th-century Persian mystic poet. Hafez’s poetry books have been gaining a foothold in American classrooms and popularity among Americans. Here is a line in the poetry of Hafez that I found interesting – “Look at the sun in quest of light, you may find it.”

Many varieties of fruits and sweetmeats are specially prepared for this festival. In some areas it is believed that forty varieties of edibles should be served during the ceremony of the night of Chelleh. The most typical is watermelon especially kept from summer for this ceremony. It is believed that consuming watermelons on the night of Chelleh will ensure the health and well-being of the individual during the months of summer by protect­ing him/her from falling victim to excessive heat or disease produced by hot summers. Another common practice on the night of Chelleh involves young engaged men. The bachelors send a platter containing seven kinds of fruits to their fiancées on this night. The girl and her family can return the favor by sending gifts back for the young man.

The Parsi community has been celebrating with a “Haft-seen Table”  at Navroze (Nawruz) events, why not celebrate with a “Yalda Table” in the December Holiday season as well ?

FEZANA requested to create some yalda recipes. Being a indian where Yalda is not celebrated by my Parsi community, this was a challenge. Many days of research and creating  food using water melon, pumpkin seeds and other middle eastern foods, I have these easy to make Recipes for the Yalda Night below.

Here are 3 recipes created for your Yalda Table.

Sweet and Salty Spread to go with your favorite crackers !

Pumpkin seeds are also called “Magaj” or “Magaz” in India and are highly nutritious.

These seeds are one of the ingredients in the parsi favorite “Vasanu”. See vasanu Recipe.

The flavor of watermelon and feta cheese explodes in your mouth. Try it sometime.

NASA discovers water on the sunlit surface of Moon
That’s right, during the upcoming winter solstice, Jupiter and Saturn are lining up to create an incredibly bright star of wonder, or what is known as a the “Christmas Star” or “Star of Bethlehem.”

These two planets haven’t appeared this (relatively) close together from Earth’s vantage point since the Middle Ages.

“Alignments between these two planets are rather rare, occurring once every 20 years or so, but this conjunction is exceptionally rare because of how close the planets will appear to be to one another,” Patrick Hartigan, astronomer at Rice University, told Forbes. “You’d have to go all the way back to just before dawn on March 4, 1226, to see a closer alignment between these objects visible in the night sky.”

Stargazers in the northern hemisphere should turn their heads and telescopes to the southwest portion of the sky about 45 minutes after sunset to see the planets align Dec. 21. However, reportedly sightings can be seen throughout that entire week.

According to Forbes, a star-sighting of this magnitude won’t occur again until 2080.

About Rita: Since 1999, Rita Kapadia, founder of ParsiCuisine.com, has provided recipes, food news, health tips and articles on this website. Recently, Rita has published several Parsi Cuisine cookbooks. Cookbooks are sold on Amazon.com worldwide. Our Parsi Cuisine cookbooks are a labor of love. The cookbooks began in an effort to maintain and preserve our recipes and traditions for the next generation, many of whom have been raised in USA, UK, Australia, France, Germany, Canada and other countries outside of India.

Thanks so much <3 Antonia. The feta cheese spread with walnuts tastes good and very easy to make.

Everything looks delicious! I especially love the nutty feta cheese spread. Thank you for sharing with us over at Fiesta Friday! Happy Fiesta Friday!

[…] this celebration is held for 5 days in Saveh. Also this fruit is an important part of the Yalda night of winter in which people gather around Iranian spreads with their families, pomegranate […]