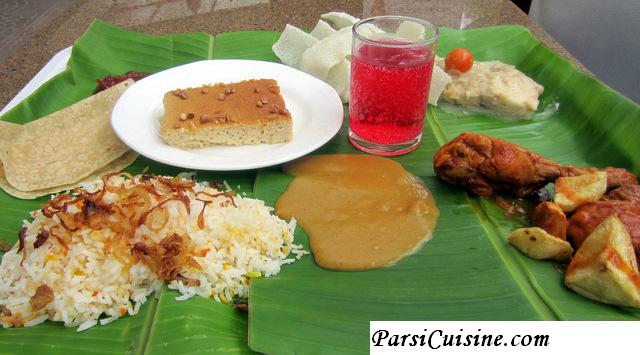 It’s a fight for a seat, and sometimes, a chicken leg, at the Parsi gahambar that celebrates an age-old tradition of praying and feasting.

At 8 pm on March 21, stewards from legendary caterer Tanaz Godiwala’s team were on stand-by like soldiers awaiting a general’s order, even as a line of cooks poured bubbling hot sweet-sour, butter-flour saas from saucepans into aluminium trays stacked with succulent boneless chunks of steamed rawas. The saas-nimacchi was soon making the rounds of aisles in a makeshift seating area at Dadar Parsi Colony where a dinner was underway on the occasion of Navroze, the holiest day of the Zoroastrian calendar, marking the Spring Equinox.

They were carrying on a tradition that some say, dates back to the times of Prophet Zoroaster. The feast that his followers in India, the Parsis, call gahambar or gahanbar – a middle Persian name for community feasting held at the end of six seasons of the Zoroastrian calendar – was held through the year to celebrate the creation of the sky, water, earth, plants, beneficent animals, mankind, and fire. Each festival originally lasted one day, but following a calendar reform, was extended to six, and finally reduced to five – the first four days dedicated to prayer, and the last to communal eating where everyone participated, either by bringing dairy, meat, legumes and vegetables or offering their cooking services.

“Currently, a gahambar is celebrated as a community event for Zoroastrians, where a thanksgiving meal is preceded by a jashan or prayer. The feasting may be sponsored either for a living person or in memory of the dear departed or simply as an act of spiritu- a l merit,” says Ervad Dr Ramiyar Karanjia, Zoroastrian scholar and priest. Most gahambars are free, with coupons distributed at landmark Parsi stores and colonies, while some are ticketed. The menu can vary as can the guest list.

Bharuch, a city that sits at the mouth of the Narmada, recently served as venue for a mithai gahambar, where the menu was dedicated to desserts. Some feasts are reserved only for women or men, with the express purpose of hewing down boisterous crowds that don’t shy away from fighting for their share of salli ma marghi.

Prepping for the big hour

In a more leisurely time than ours, the rich and poor came together to celebrate. Bhicoo Manekshaw writes in her book, Parsi Food and Customs, “each person may contribute to the function what they can, and rich and poor come together to eat. If a person is too poor, he can even help with the preparation of the food. The meal is simple – masala ni dar ne chawal. Sometimes, someone may contribute an additional dish, which is usually a mutton dish like papeta ma gos (mutton and potatoes).”

This community service is now a memory. All the cooking and serving at modern gahambars is handled by professional caterers, who charge a smidgeon of their regular fees as a service to their community.

Kurush Dalal, archaeologist and caterer at Katy’s Kitchen, has manned the kitchen for Dahanu’s once famous annual gahambar, known to draw 4,000 guests from across the country. Dar-chawal (dal-rice) and stew tend to be staples, he says, although deep pockets often mean that a mutton dish is thrown in. “At the Dahanu gahambar,” he recounts, “we served 200 kg of mutton.” The dal remains the beating heart of the meal, especially in the towns scattered across Gujarat.

Dalal, who remembers his grandfather recounting gahambar tales, says intrepid gahambar-goers would carry lemons in their pocket, because caterers wouldn’t serve lime wedges to squeeze over the dar. “This was later confirmed by my father. In fact, Gustaad Irani, who hosted the Dahanu gahambar, told him he was proud that he was one of the few hosts to serve the guests an abundant supply of lemons.”

The five-day affair may have been pared down, but preparations continue on a daunting scale. Cooking usually starts the previous night. “We bring in the meat at about 3 am before leaving it to marinate for an hour in aadu-lasan (ginger-garlic paste). It’s then slowcooked in giant handis overnight, on mango wood,” says Dalal. The catering staff works overnight to finish prepping, so that the dar can be shifted to the stove to slowly bubble away. “This is because most gahambars are held at lunch time.” The tapelas (pots) are so large, four adults could sit in one. Naturally, once mounted on the fire, they aren’t moved until after the service.

Philanthrophist Sir Jamsetjee Jejeebhoy, an orphan who made his fortune by trading in cotton and opium with China, is often credited with reviving Mumbai’s gahambar tradition by donating a handsome sum to the Bombay Parsi Punchayet for the same. Now, most feasts are organised by individuals or charity trusts set up exclusively for the purpose. “We usually hear of them in Parsi newspapers, or through friends. I start queuing at noon to get a seat,” says Bakhtavar Batliwalla, a gahambar regular. But as night falls, crowds swell at Charni Road’s Albless Baug, a common venue for Parsi weddings. Unlike Manekshaw’s frugal meal, some gahambars rival wedding feasts. “At the last three feasts, there was salli marghi, tarkari par eeda (eggs on vegetables), egg curry rice, cold drinks, achaar and ice cream,” says a satisfied Batliwalla.

Clearly, the feast serves as social glue, braiding the scattered community. “It fosters a spirit of unity. It goes beyond the rich-poor divide and works to the common end of progress and prosperity,” says Karanjia.

The stories behind why each gahumbar is held are sometimes as delicious as the eats served on the occasion.

In Variav, a village that sits on the banks of the Tapti river in Surat district, once lived several Parsi families ruled by a brazen Rajput king, who taxed his subjects mercilessly. The Parsis rebelled, and to quell the protest, the king sent mercenaries to Variav. The men were away at work, with only women and elderly at home. Not to cower in the face of a challenge, the women dressed in male attire, drew their swords and fought the mercenaries. It was only when one of them noticed a earring on one of the ladies’ that they realised they were about to be beaten by women. Furious, they came on stronger, forcing the women to retreat and jump into the river, to avoid capture. The elderly lived to tell the tale.

Forever and after, the men of the village held a gahambar on that day each year to honour and remember the feat of their brave wives and sisters. It is said that the only dish to grace the table was vaal (a type of white bean); its bitterness a reminder of their sacrifice.

In the sleepy hamlet of Sanjan, on November 17 every year, a gahumbar is held to mark the occasion when Persian refugees fleeing Muslim Arab invaders in the eighth century, landed in Gujarat. Parsis celebrate the occasion as Sanjan Day by hosting a grand vegetarian gahambar. Last year, the Flying Ranee that shuttles each day between Surat and Mumbai Central, even made a special twominute halt at Sanjan, for droves of Parsis rushing there.

Elsewhere, a less momentous event draws families from Thane and Valsad districts. The junglewasi gahambar sees men who manage their farms come together with their wives who live and work on the coast, once a year. In the pre-prohibition days, palm wine or toddy was served to cool parched throats. “It’s a great place to catch up on who got married, who died, who had children and who ran away,” laughs Kurush Dalal, who has catered for the junglewasi gahumbar in the past.

Welcome to ParsiCuisine.com A site with one of the largest collection of American Indian Parsi Food Recipes, Videos, and Cookbooks. Check out our Online Cooking Classes, filled with fun cooking tips and stories. I delight in bringing people together over the globe. Consulting, supporting, encouraging and guiding everyday Homemaker, Chef, Caterer and Restaurant owners.

Tip: When printing, select the page number and print to save trees. Share and pass this along. Thanks. 🙂

Did you like this, did you find it useful? Suggestions are always welcome. Cancel reply

Enjoy these Recipes & if you make the dish, let us know.