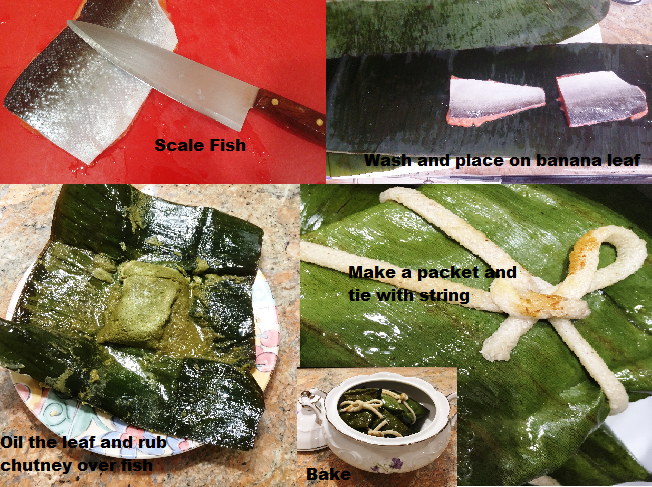 While vacationing in Dahanu a couple of years back, and driving back to Gujarat from the Maharashtra state. I saw fisher women selling promfrets, pronounced locally as pamplets on the roadside. Dahanu is a coastal town and a municipal council in Palghar district in the state of Maharashtra, India. It is located 110 km from Mumbai city.

They had freezers in their lovely home to store their catch.  However the fresh fish would be sold within 2 hours and if you wanted any pamplet or prawns you better rush there in the morning.

These fishermen and fisher women live along the coast line of Dahanu with their houses on the beaches. Living a simple life they make a living catching the ocean bounty. I talked with the mother and father whose son was coming to USA to study. Now that’s progress !

Patra ni Maachi chutney is very easy to make. With fresh cilantro, lemon juice and other ingredients.  The same chutney can be used to make chutney sandwiches at a later time.

Banana leaves are found in US in many Indian, Korean and Chinese Stores. The word “Patra” literally means “Leaf” in gujarati. “Maachi” means “Fish”. So do not be intimidated by the strange words, translated, the dish is  Fish wrapped in Banana Leaf with delicious Chutney.

I have found  pamplets in US in HMarts, called by a different name – plammuro. These are a bit yellow and not as white as found in India. They do have the same look, taste, texture and feel.

Pomfrets are perciform fishes belonging to the family Bramidae. The family includes about 20 species.

They are found in the Atlantic, Indian, and Pacific Oceans, and the largest species, the Atlantic pomfret, Brama brama, grows up to 1 m (3.3 ft) long. Fish meat is white in color.

Several species are important food sources for humans, especially Brama brama in the South Asia. The earlier form of the pomfret’s name was pamflet, a word which probably ultimately comes from Portuguese pampo, referring to various fish such as the blue butterfish (Stromateus fiatola). This fish also called as ‘Maanji’ (ಮಾಂಜಿ) in Tulu and paplet in Urdu, Marathi and Nawayathi.

I found a substitute fish here in the US called “Palmunaro” in H-MART. They are similar to pamplet from India.

Thanks Sandhaya, good to know you eat fish. I just love your blog creations and https://indfused.com/ recipes.
Are you Veg?

Rita I eat chicken, lamb/goat meat and am crazy about fish. I grew up eating fish 3 times a week and mutton/chicken on the Sundays. My mother was a fabulous cook with two cookbooks in Marathi.
I love Parsi food . My mother used to make the shrimp patia and the fish in banana leaf.

We are so similar! We Parsis probably learnt from your community. Do let me know your mothers cookbook names and where to get them in mumbai, are they in print?

My mothers 2 cookbooks are Ruchi and Zanzaneet Non veg both by Vaijayanti Rege. They are in bookstores in Dadar Mumbai. I had got a few copies here for sale as well.
Have a great weekend Rita!

Rita, My mother’s cookbooks in Marathi are Ruchi and Zanzaneet non-veg both by Vaijayanti Rege. they are available in bookstores in Dadar,Mumbai. Also I had got some here for sale.

Delicious recipe. I tried this once at a Parsi restaurant and absolutely loved it 🙂

Thank you so much Freda ❤

Dear Sandhya, I will be happy to put your Mother’s cookbook on my site anytime.

Thanks so much Rita!

You are welcome anytime, what are friends for. Rita.

[…] judged almost entirely on the quality of the pulao dal (rice and lentils) and the freshness of the patrani macchi (fish steamed in chutney). For any other occasion or milestone, we scrupulously avoid fasting, […]

[…] a sweet and sour “Khataa Mittha” Patyo, Fried Fish, Patra ni Maachi  or a spicy meat dish “Boti” is served as an accompaniment to the rice and […]

Is your chutney missing Cilantro?

Hi Divyesh, Thank you for bringing it to my attention. The chutney was made with cilantro of course but it was missing in the recipe given here. It has now been corrected. Very much appreciate your kind gesture. Happy New Year!

[…] the ‘magic touch of experts.’ The marga farch (crumb fried crispy chicken with bone) and patrani macchi were just the beginning of a fabulous […]

Health Effects of Garlic and how it is used in Parsi Food. – Parsi Cuisine

Best wishes for a very Happy Navroz for you and your family in 2022. – ParsiCuisine.com

If you were in a mood to serve only Patra No Machi and nothing else (meat dish), what side dishes would you serve? No salads – something that’ll augment/enhance the experience. Thanks!

Love all Parsi cuisines. Grew up in Bombay near Five Gardens with many Parsi friends. Eat many authentic Parsi delicacies on all occasions from Navroz to glamorous weddings – normally a Royal spread of all types of the best dishes where you ate till you dropped. Watching my friend’s moms cook (or give lessons to our moms) I had secretly recorded every ingredient that went in every dish, and the painstaking process. The easiest ones being Patra Ni Machi, and Dhansak – which I’ve cooked for years.

Serve Parsi Dhun Daar (basmati rice and lentils cooked separately) with the Patra ni macchi. The taste of steamed chutney fish with steamed basmati rice and mild toover daal will go well. Pickles on the side.

Health Effects of Garlic and how it is used in Parsi Food. – ParsiCuisine.com