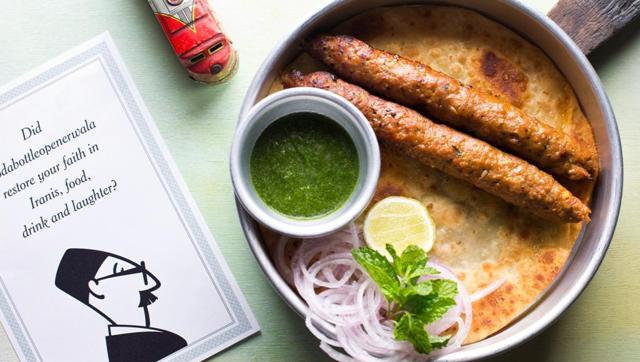 Since its opening in Gurgaon two years ago, SodaBottleOpenerWala (SBOW) has enjoyed good reviews from patrons and critics alike. Whether it is the décor — complete with a make-believe family tree of Rustom SodaBottleOpenerWala (the Parsi mascot who appears on plates, coasters and stirrers) — or the menu, that includes favourites like mutton dhansak, akuri and the popular Berry Pulao, everything has a quintessentially Parsi stamp on it.

With its latest outlet in Mumbai (fifth, after Gurgaon, Delhi, Hyderabad and Bangalore), SBOW is paying an homage to the legacy of Irani cafes. And to accomplish this mission, restaurateur AD Singh and his team have picked two young Parsi chefs — Anahita Dhondy and Darius Madon. “SBOW is Britannia, but in 2015,” says Dhondy (25), its chef manager who overlooks the Delhi and Gurgaon outlets. Like the Irani cafes of Mumbai that mushroomed in the business districts of south Mumbai, mostly to provide a quick bite to businessmen and traders, SBOW wants to fill that void for the office-goers in Bandra-Kurla Complex. “We want to be your neighbourhood pub for post-work drinks or a café for a meal between work,” says Madon (30), who helms the kitchen at the new outlet.

Inspired by the sights and sounds of the city, SBOW reflects all the charms and idiosyncrasies the community is known for. Sabina Singh (AD’s wife) and architect Clement DeSylva have managed to capture the eccentricity of an Irani café through the signature blackboards that read out the “Rules of the establishment” like ‘No Laughing Loudly. No Singing. No Childish Tantrums. No Talking to Cashier’. The white and red checkered tablecloth and other paraphernalia such as the brass tea kettles, metal locks, glass jars filled with nankhatai and cuckoo clocks give the space an authentic look.

Interestingly, both the chefs are products of the Institute of Hotel Management (IHM), Aurangabad, just six years apart. While Madon is a pukka Parsi from Mumbai — home to the largest Parsi community in the world, Dhondy grew up in Delhi among a predominantly Punjabi neighbourhood. “In school, me and my brother were the only Parsis. I had to show my sadra and kashti (sacred vest and thread) to my friends to make them understand what it means to be a Parsi,” she says.

Rituals and customs apart, SBOW has been her biggest identity. “In Delhi, I have people coming in and take

pictures with me standing next to them. Sometimes, I feel like an animal in a zoo,” adds Dhondy. Thankfully, for Madon, such instances would be a rarity at the Mumbai outlet. For him, SBOW is a way of portraying his love for Parsi food.

Ode to the original

“The menu here is inspired by the Iranis of the city. A lot of research went into perfecting the recipes that are our take on popular dishes like the dhansak and prawn patio. The dhansak recipe is my great grandmother’s,” says Dhondy. In fact, the Dhansak masala used at all the outlets, too, comes from her home, perfected over a hundred years. Her training in the cuisine began in her mother’s kitchen. For the last 25 years, she has been catering to small events in Delhi. “Earlier, the only way to eat Parsi food in Delhi was at someone’s home. With SBOW, we want to take it to more people,” adds Dhondy.

At the Mumbai outlet, Madon — who has had stints with Taj SATS, ITC Group of Hotels and The Sassy Spoon — will be adding his influences to the menu. “We are also trying to portray Mumbai’s street food that has been picked up through extensive research. For instance, popular street fare like the Bhindi Bazaar Seekh Parantha and Vada Pav will be on the menu too,” he says. We’ve also heard that the team plans to add dishes like Chicken Sanju Baba from Noor Mohammadi to the menu.

The old world décor and nostalgia-evoking food aside, SBOW’s success can also be attributed to its timing. When it opened the first outlet, regional food was undergoing a major revival. Right from restaurants to pubs, menus had begun celebrating food from north, east, west and south. “Right now the craze for regional food is at its peak. When we first opened, I remember going from one table to another explaining the dishes. Now people come in knowing that dhansak is popular,” says Dhondy.

This is a good sign for a cuisine which — unlike others — have fewer crusaders fighting for its cause. “We have lost so many of our recipes. I remember my aunt used to make this brinjal and apple chutney and I kept asking her for the recipe. But she passed away without giving it to me,” says Dhondy. Madon recounts how an old family friend — a 90-year old Parsi lady — is the only person who knows how to make stuffed kheema bread. However, she has no means of passing the recipe on as she cannot read or write. “Unfortunately, that recipe is going to die with her,” he says.

With SBOW, Dhondy and Madon are striving to revive recipes that are on the verge of extinction. “We are like a ticking time bomb,” says Dhondy about the community. “I think we will go before the tigers,” adds Madon in jest. Food and humour are two things that make Parsis such a fun community. So, what would the chefs recommend we try from the menu? “I love the Kolmi fry. It is a succulent piece of prawn wrapped in a kanda bhajji,” says Madon. However, we would be curious to know if the Parsis in the city approve of its dhansak.