A Food Tour of Udvada 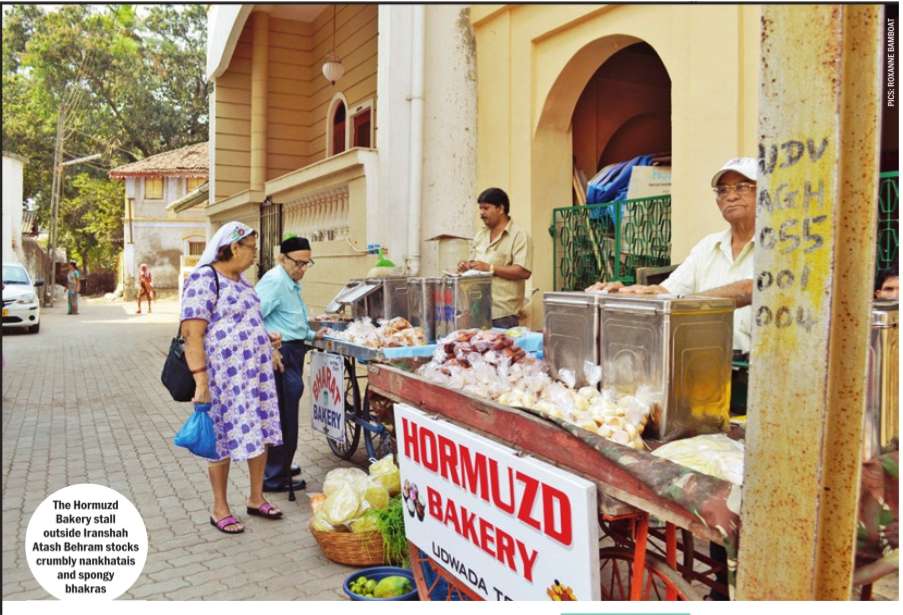 A Food Tour of Udvada

Instead of booking a table at a city Bawa eatery on Parsi new year, drive to Udwada for boi, dal-chawal and patio

It’s the oldest story of amalgamation, and if Zoroastrian history in India has a beginning that involves a drink, how do you expect Parsi culture not to be firmly glued to all things edible.So, a return to the story of amalgamation, in brief. When a group of Zoroastrians from Persia arrived as religious refugees in Sanjan, on the coast of Gujarat, they were seeking local king Jadav Rana’s approval. Having fled the Muslim Arabs invading Greater Khorasan in the eighth century, they wished for a safe haven to practice their religion. Rana wondered how a people so distinct in culture and language would live around the locals in harmony. He presented them with a glass spilling over with milk – a symbol of his prosperous land brimming with people, and no room for conflict. The Parsis asked for sugar. Tossing in a spoonful without any spillage, they spoke of seamlessly blending in with Rana’s folk, while adding a tinge of sweetness.Udwada, a seaside town 200 km from Mumbai (and 30 km from Sanjan), is the seat, both, of Zoroastrianism (it houses the Iranshah Atash Behram – one of nine fire temples globally, holding the oldest, continuously burning ritual fire-temple in the world) and Parsi food traditions.The Parsis kept their promise. Their food, moons away from Persian eats, is closer to local Gujarati coastal cooking, featuring indigenous fish, lentils and curries, all accompanied by Indian carb staples – chaval and rotli.

It’s a taste of this that awaits you on any leisurely weekend in Udwada, which you should kick off with a stroll on the beach and walk through its winding alleys, some of which house century-old structures in ruins.

Udwada has nothing to offer tourists, except a bright sun, cool sea breeze, quiet afternoons and smiling locals who serve gher nu bhonu.

In true Bawa tradition, you must celebrate food enroute, too. Break your journey for a breakfast of eggs at Ahura. We recommend the Parsi kheema (Rs 155), spicy and beautifully paired with freshly baked pav. The Parsi poro (masala omlette; Rs 60) or akuri (bhurji; Rs 70) are other must-trys, but we give our vote to the salli per eedu (eggs on potato vermicelli; Rs 90).

Well, you have two options. Either you grab lunch en route, or at a hotel in Udwada. If it’s the first you are thinking, make a stop at Parsi Da Dhaba. They serve a robust Parsi menu together with tandoori items, and a fair vegetarian spread. Doodh na puff are available, but only in the mornings (Rs 55/glass). Call: 088062 79379

4. At The Globe Hotel

It’s one of Udwada’s older outposts, and its quaint cottages are popular for an overnight stay with Mumbai’s Parsis. Established in 1924 by Kekobad Hormusji Sidhwa, originally its caretaker, it’s now managed by third generation Sidhwas. Even if you don’t intend to stay on, it’s a good pit-stop for lunch (Rs 500 per head; good enough for two). Their only request – call in advance to book a table. Don’t go looking for a menu. They decide what you’ll eat, and it’s almost always delicious. Order a fried boi – a crisp exterior holds tender, sweet flesh within. Parsis also love their curry, and if you are beside the sea, it has to be machhi ni curry. Globe’s version is fiery and served with kachubar (diced onion, cucumber, tomato and coriander, sprinkled with lime juice) and rice or rotlis. Globe’s rustic roast chicken is what you should order if you want a taste of non-lagan nu bhonu. Call: 0260 345474 / 09879817333

Lunch at Ashishwang is synonymous with a drive here, so grab a seat early. Unlike Globe, this one is a two-story modern structure, but since it’s closer to the shore, it enjoys lulling sea breeze. There’s a garden play area for kids, and the food is homestyle. Order mori dar (plain dal), chawal and patio (usually fish or prawnbased tomato-onion gravy), and a side order of tareli boi (fried mullet), best eaten with fresh rotlis. They also do a mean Parsi version of roast chicken (tarela papeta ni murghi). Fried potato crescents and chicken chunks swim in a mild, creamy gravy of onion. Lunch is priced at Rs 450, and good enough for two. Call: 0260 2345700

6. At Sohrabji Jamshedji Sodawaterwalla Dharamsala
It’s 12 rooms are rented out at nominal rates to Parsis looking to stay, but its canteen welcomes the hungry from all communities. They offer both, set and ala carte meals. The mutton dhansak here is a dream. The dal is luscious and thick, littered with chunks of soft meat, served with fragrant caramelised rice. If it’s a chapati meal you crave, order them with salli boti (sour-spicy chicken in tomato gravy sprinkled with crisp potato straws). While Globe and Ashishwang skipped dessert when we were there, Sodawaterwalla’s lagan nu custard and raspberry jelly were a perfect end to a hearty lunch. Call: 0260 2345688

Sancha Ice-cream: It’s not a brand. Sancha refers to the technique used to make handchurned, home-made ice-cream, usually served from the backseat of a rickshaw that makes the rounds of most hotels. The flavours are seasonal, so it’s mango (Rs 20/2 scoops) you should be asking for right now. Custard apple and strawberry are available throughout the year.

Doodh na puff (milk froth): This pearly white, frothy concoction is made with cardamom-laced chilled milk, and best had early morning. Local women come around to hotels and dharamsalas carrying trays lined with glasses. It’s best to ask hotel staff to keep a tray (or two because no one can have just one) ready for you the previous night.

MAKE SURE YOU TAKE HOME

Hormuz Bakery bites: Right outside the entrance of Iranshah is a man selling touch-andcrumble bhakras (a tiny doughnut that’s a teatime favourite) and nankhatais (Rs 200/kg). The bakery is housed elsewhere, but this pop-up is easy to find.

Home-made masala: Every shop outside Iranshah stocks Parsi masalas. But a gentleman in a neat salt-and-pepper braid, hawking masalas out of his car, just beside the Hormuz Bakery cart, is the guy to sniff out. You can choose from dhansak powder, parsi curry (Rs 160/200 gm) and vindaloo masala. He also stocks vinegar and sukka boomla no patio (pickled dried Bombay duck).

Peppermint and papads: Women from around the seaside town gather in its alleys with baskets stacked with fresh peppermint, thin-as-air papads (Rs 80/packet), sarias (sago wafers bets eaten with laga nu achar at weddings), fresh garlic (toss some in your scrambled egg) and limes larger than you find in Mumbai.

Many thanks for your visit today from author Rita Jamshed Kapadia. Rita's Mega Cookbook "Parsi Cuisine Manna of the 21st Century" and 11 cookbooks in the Parsi Cuisine Series are available on Amazon.com Buy the printed Paperback or read the eBook Worldwide. To order autographed cookbook, email Rita@ParsiCuisine.com If you have purchased and cooked a dish from any of her cookbooks, please leave a review/comment here or on Amazon.

[…] eat or greediness. A Papadkhao, therefore, could be a devoted consumer or hoarder of crispy fried papadums. The existence of Bhajikhaos (vegetable-eater) demonstrates that not all Parsis were raging […]

Hi Zubin, Thanks for the link.
TIP: You may want to add more description with the link, so readers are motivated to click on it.

Yes we do share the same sentiments. I am located in the US but am originally from India. Do keep visiting and sharing tips.

Thank you Rita. We seem to share the same sentiments. Thanks to this wonderful site also.

Best wishes and a thanksgiving from this site to all.
Rita

Absolutely mouthwatering.. Nothing short of amazing as to how they can dish out such superb meals. God bless the chefs and the diners, as they say “Pakavta ne ji ne jamta ne ji “.