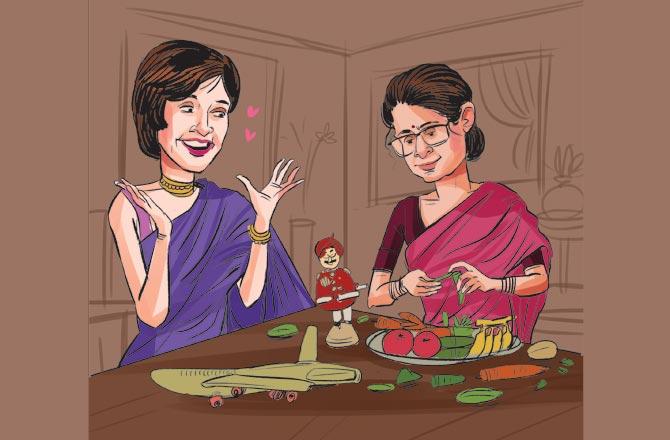 The Shedde family has a special relationship with Mrs Ewing, that started at the raddiwalla. We lived in a modest chawl in Santa Cruz during my childhood, and moved to a three-bedroom apartment when I was in primary school.

Gulshan Ewing, former editor of Eve’s Weekly and Star & Style, passed away last week at 92, from COVID-19, in the UK. Journalist Ammu Joseph, former assistant editor at the magazine, posted on Facebook about how Mrs Ewing let them write about women’s liberation in the ’70s, “as long as we didn’t interfere with…cookery, fashion and beauty,” resulting in a “schizophrenic magazine.” A Parsi married to an Englishman in India, Mrs Ewing rubbed shoulders with many celebrities in her 30-year career, including Gregory Peck, Cary Grant, Roger Moore, Kirk Douglas, Alfred Hitchcock, Prince Charles and Roberto Rossellini. But her favourite was Danny Kaye, her daughter Anjali told the press.

The Shedde family has a special relationship with Mrs Ewing, that started at the raddiwalla. We lived in a modest chawl in Santa Cruz during my childhood, and moved to a three-bedroom apartment when I was in primary school. My mother, Indu Shedde, was determined to make the move. “But, after paying the house instalments, your Papa gave me just R219 every month to manage the house. I had to do something urgently,” she told me. “At the raddiwalla, I saw Eve’s Weekly—we couldn’t afford it. It had some rudimentary vegetable decorations. I knew I could do better.” She did her best, then went alone by train to Churchgate and walked to the Eve’s Weekly office, off Dalal Street. “I had worn a beautiful nylon saree with birds that Yeshwant Bappa [our uncle] had brought me from Kuwait,” Amma said. “What a lovely saree you’re wearing,” Mrs Ewing said, and it immediately broke the ice. When Amma showed her, her vegetable art, she was incredulous. It was a spectacular Boeing aeroplane with the Air India Maharaja, made entirely of fresh vegetables and fruit. The body and wings of the plane were made from bottle gourd (doodhi), with ivy gourd (tendli) engines and carrot wheels. The Air India Maharaja had a potato face, tomato turban, red apple jacket and white spring onion churidar. “All this from vegetables and fruit? This is so beautiful and unique,” Mrs Ewing exclaimed. She immediately had photographer Ashvin Gatha take a picture, and they even sent a complimentary copy when it was published. Mrs Ewing paid her R50 for it. “She was very sophisticated and helpful, and she said the readers loved my work,” said Amma, who sometimes took me along to the Eve’s Weekly office. She made many inventive vegetable creations for them, starting in 1967—a vase of flowers, a Bharatanatyam dancer, Santa Claus, a sailing ship and even an aquarium. The highlight was her Eve’s Weekly cookery special cover, with a mother and daughter holding a tray of food, made entirely from vegetables.

“I owe Mrs Ewing my vegetable art career,” Amma said, sorry to hear that she had passed away. After that first break, Amma had her vegetable art published in Span and Dharmayug magazines, as Vakils and Thackers greeting cards, and commissioned by the Taj Mahal Hotel and Hotel Centaur, and for a Woodlands ad. She even represented India at the World Vegetarian Congress in the US, showcasing her art there in 1975. My mum is now 93. When life gave her lemons, she grew lemon trees. My sister and I are lucky to be raised by a mum like that, daring and accomplished, who travelled the world, and Mrs Ewing had no small part in it. Adieu Mrs Ewing!

Tribute to Gulshan Ewing, by a former colleague.