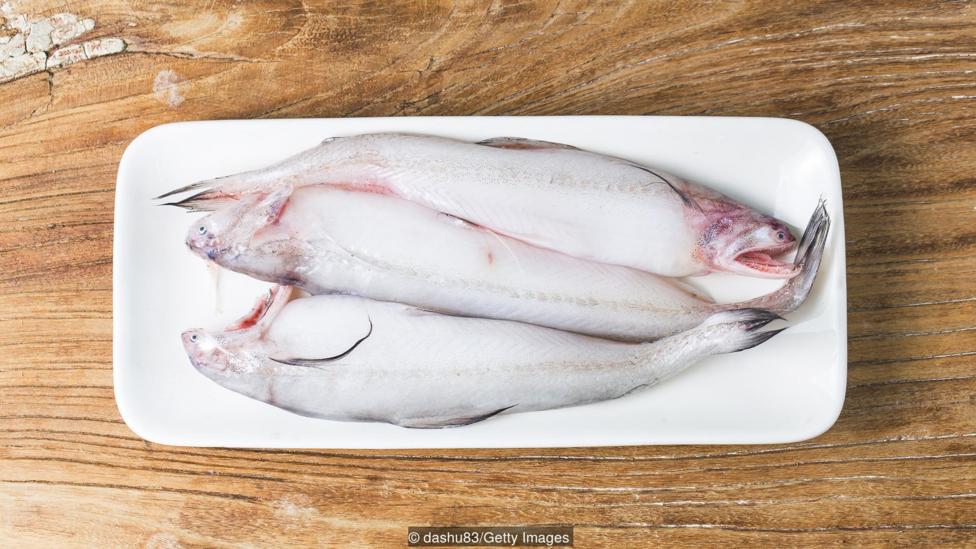 Fiendishly ugly and pungently smelly, Bombay duck can be quite off-putting. So why is it so beloved throughout Mumbai?

When I was a little girl growing up in Bombay, June was the month I looked forward to the most. It was the month when the charred, inky monsoon clouds, clipped with streaks of lightning, brushed away the fetid summer heat. It was when I went back to school with my new books, wrapped carefully in crackling-new brown paper. Best of all, June was also the month for the Bombay duck to grace the kitchens of Parsi homes such as mine. This delicious monsoon specialty, which is most plentiful and easiest to catch during the rains, was how I marked the time. It pinned the season into place.

But who are the Parsis? And what is a Bombay duck?

Bombay duck isn’t a duck at all and is eaten by Parsis and other groups across Mumbai (Credit: Meher Mirza)

Parsis are Zoroastrian immigrants from Iran who have called India home since the 8th Century AD, but it was under colonial rule in Bombay in the 19th Century that they truly flourished: Parsi entrepreneurs leveraged their aptitude for Western education and sensibilities, as influenced by the British, to obtain coveted positions in Indian industry and politics. They became titans of trade and commerce, and used their enormous influence to endow schools, colleges and hospitals for the poor.

Later, in the 19th Century, a second swell of Zoroastrians blew into Bombay. These canny entrepreneurs were the Iranis, who started the iconic Irani cafes that have traditionally served food to people of all castes, religions and genders.

Like India itself, Parsi cuisine has absorbed the influences of a host of cultures who have made their mark on the subcontinent – the plinth possibly lies in pre-Islamic Iran, but it also draws from the Indian regions of Gujarat, Goa and the Konkan Coast, as well as Britain and even the Netherlands. Geographies and histories peel away with every mouthful of food.

Britannia & Co Restaurant, with its Union Jack flag and image of Queen Elizabeth II, is one of Mumbai’s most famous Irani cafes (Credit: Indranil Mukherjee/Getty Images)

Thanks to Parsi settlements that rimmed the Indian coast, specifically in the state of Gujarat, fish became tightly yoked to Parsi culture. We eat chhamno (pomfret), boi (a sort of mullet), kolmi (prawn), levti (mud hopper), bhing (shad), rawas (a kind of Indian salmon) and bangra (mackerel), among others. And then there’s the Bombay duck.

Fiendishly ugly, it is gelatinous and pink-skinned with a gaping maw

The Bombay duck is actually a fish native to the waters in and around Mumbai. Fiendishly ugly, it is gelatinous and pink-skinned with a gaping maw. Moreover, the root of its curious name is a great mystery.

The word could have been a colonisation of the local Marathi name for the fish, bombil, used by the Maharashtrians that the British couldn’t twirl their tongues around. Or perhaps the name is an Anglicism born from the Marathi bazaar cry, “bomiltak” (loosely: “here is bombil”). But the most famous explanation is the one set out by Indian-born, British-Parsi writer, Farrukh Dhondy, in his book Bombay Duck. He believes that the name came from the British mail trains that huffed odoriferous orders of dried fish from the city to the interior of India. These wagonloads became known as “Bombay Dak”. (The word dak means “mail”.)

Bombay duck is actually a fish, and the root of its curious name is a great mystery (Credit: dashu83/Getty Images)

Love for this fish runs deep within the diverse cultures of the city. One of Mumbai’s earliest residents, Koli fishermen, have been salting and sun-scorching the fish by pegging them up on large racks fashioned from bamboo stilts called valandis for hundreds of years. The drying fish gave off a stench so strong that British colonisers believed that it was harmful to their health, although they later grew to love them. These wizened dried fish, eaten during the monsoon, offer bursts of concentrated, nearly raucous savouriness when rehydrated and cooked into curries or dry-fried as an accompaniment to dal and rice. Koli fishermen eat it fresh too, sheathed in fiery Koli masala, or semi-dried (bambooke bombil) and cooked into a spirited coconut gravy.

Most seafood-loving communities of India’s western Konkan Coast, such as the East Indians and Maharashtrians, also find Bombay duck intrinsic to their cuisine. The East Indians grind it into a vinegary chutney or roast and fry it, sometimes stuffing it with a bellyful of tiny prawns. Some Maharashtrian communities fry it into a bhaji (fritter) while others stir fresh greens into the dried version or cook it with an onion tamarind masala.

For hundreds of years, Koli fishermen have pegged Bombay duck on large racks by the sea to dry them in the sun (Credit: Indranil Mukherjee/Getty Images)

Clearly, Bombay duck doesn’t just belong to Parsis, but it does feel almost totemic to our community. It makes its way onto our plates and into our songs, our books and even our names: Boomla (the Parsi word for Bombay duck) is a fairly common Parsi surname.

My father’s memories of growing up in the small Gujarati town of Bilimora, about 215km north from Mumbai, are knotted to my grandmother smoking dried fingers of Bombay duck over a charcoal fire until crisp enough to crumble into shards. These are the roasted, dried Bombay duck of my dreams – sawed back and forth over kitchen flames, their smoky flavour can’t be recreated on my Mumbai kitchen stove.

Bombay duck doesn’t just belong to Parsis, but it does feel almost totemic to our community

Luckily, though, there are other ways to salve my craving for dried Bombay duck, such as Tarapori patio. Just a scallop’s worth of this spicy Bombay duck pickle enlivens a bland yellow dal and rice. Dried Bombay duck is also dunked into a stew called Tari ma Sukka Boomla that hums with the rasp of toddy (an alcoholic drink drawn from the sap of a palm tree), jaggery (a fudge-like unrefined sweetener), vinegar and dried red chillies.

Fresh Bombay duck is also made into a gravied patio (pickle), or sometimes eaten as salty khara boomla that’s served in a pale, creamy gravy pearled with onions and eaten with rice.

My favourite though? Craggy clouds of pan-fried fresh fish, fragrant with lime and turmeric, their surfaces lacquered with semolina flour that has been bronzed by the hot oil. The Bombay duck prepared this way is usually eaten as a breakfast dish, paired with stacks of chockha ni rotli (rice-flour rotis) and gor keri nu achaar (sweet-sour mango pickle). The more staunch of stomach might accompany it with mutton mince, akuri (a sort of Parsi version of scrambled egg) or levti (mud skippers) fried on a griddle.

Yet, to taste Bombay duck in this particular style, you would either need an invitation to a Parsi home or to an old-time club such as the Mumbai landmark PVM (Princess Victoria and Mary) that’s densely populated by Parsi aunties and uncles – or a trip to the iconic Irani cafe Britannia & Co Restaurant. Dating to 1923 and something of a crumbling time-capsule, with its framed picture of Queen Elizabeth II and Mahatma Gandhi in a grand, Renaissance-style dining room, this vintage slice of Mumbai is one of the only places in Mumbai – perhaps the only place – that doesn’t require an invitation to eat Parsi-style Bombay duck.

Here, it is cloaked in semolina and fried to a crisp on the outside, while its belly stays soft, pliant and collapsing within. Elsewhere, in Mumbai’s myriad non-Parsi seafood eateries, it would be deboned and cudgelled to flatness for maximum crunch. For many decades, customers also had the added charm of engaging with the restaurant’s charismatic Parsi owner, Boman Kohinoor, the self-proclaimed “biggest fan of the Royal Family” in India. (A giant picture of William and Kate hangs in the restaurant.) Until his recent death at the age of 97, Kohinoor often told me that I resemble the Duchess of Cambridge. (I don’t.)

Parsis’ love for Bombay duck stretches back centuries. In 1795, a Parsi businessperson, Seth Cawasji, was recorded to have presented half a ton of dried Bombay duck and 30 dried pomfret fishes to the governor of Bombay. Later, in Navroji Framji’s 1883 recipe book, Indian Cookery for Young Housekeepers, she calls the fish “bombloes” and offers up two recipes: one, a dried fish stew with tamarind, ginger-garlic, chilli and fried onion; and the second, a chilli-fry of dried bombloes cooked with turmeric, coriander, pulped tamarind and green chillies.

Who names themselves after an ugly fish?

Much later, in 1975, Parsi musician-composer Mina Kava gave musical shape to the community’s love for the fish by writing a song called Bombay Duck, which begins: “Here’s a story simple / of a duck with a little dimple / he’s the strangest little duck / this little ducky never clucks.”

It’s often the kitchen that carries the weight of a culture on its shoulders; food can be the purest distillation of a people. If one had to bend the prism towards Parsi food, what might it reveal? Our roving tongues, teeter-tottering across countries? The fluidity of our taste buds? Our chameleon-like propensity to adapt and assimilate? Our eccentricity? After all, who names themselves after an ugly fish?

Or perhaps all that matters is that every year, when the city’s summer cedes to wind-whitened monsoon, my anxieties loosen and I remember when I was a girl in school, dawdling over a plate of bombil.

Culinary Roots is a series from BBC Travel connecting to the rare and local foods woven into a place’s heritage.

Copyright © 2020 BBC. The BBC is not responsible for the content of external sites. Read about our approach to external linking.