May the angels of destiny visit and bless baby. 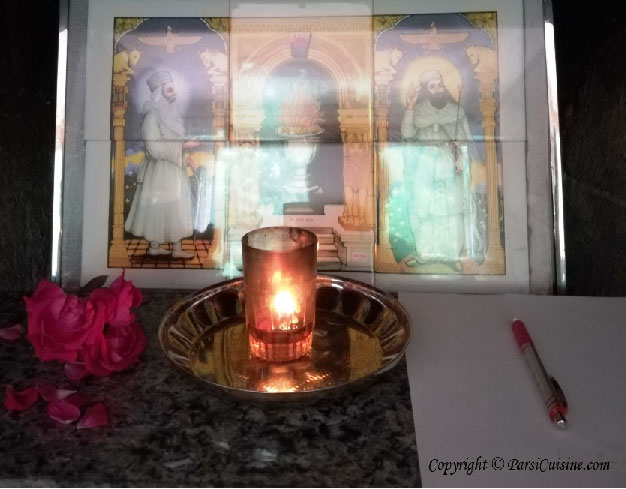 May the angels of destiny visit and bless baby.

In parsis a ancient “Chhathi na lekh” ritual is performed on the sixth day after a baby’s birth.

In parsi community, the belief is that on the 6th day after the birth of the child, the angels of destiny quietly enter the house around midnight to pen the destiny of the newborn.

Traditionally, on the eve of the sixth day after the birth, the mother of the newborn lights a divo. The divo along with a red pen and paper are placed on a flat surface, for the angels to write the future of the newborn. Place a photo of Zarathustra, a Fravahar and an religious idol that holds meaning for your family.

The mother holds the baby in her lap, making sure the babys head is held well and does not roll. At this stage of just 6 days, the head has to be held firmly.

Next, mother and father say a small prayer while placing their hands on the baby’s head. Three Yatha Ahu Vairyio and an three Ashem Vohu prayers.

Ceremony is over. May the angel of destiny visit (Chatthi mai) and bless baby.

In Gujarati Hindu it is an actual pooja ceremony.

Comments & from Facebook Worldwide Zoroastrians Group. https://www.facebook.com/groups/worldwidezoroastrians (for the protection of the individuals names are not included, if you want your name with the comment please contact us):

1. Yes for us our mum had done n I have done for our two daughters. my mother did it in Calcutta for us. Actually my sasu said to keep the clothes. Peravi ni devana. N those handkerchiefs are used as Goodluck.

2. I did it for both my children.. and, we finalize the child’s name and the mom whispers it in his/her ear when we do this divo for the chhatti na lekh ceremony…

3. Never heard of it…. is it a Hindu ritual?
Answer Arbez, it is rooted in hindu customs. Living in India with Hindus, for 700 years and more, we parsis adopted many rituals and even sanskrit in weddings.

yes all the gujjus n Jains do the chatthi ceremony !Theres a red pen placed on a blank paper ,a divo , flowers chokha and kanku is placed to on the paper and kept overnight.

my mum has mentioned this and I believe I have seen a piece of paper somewhere in my house which was the “chatti ni lekh” for either my brother or sister. I’ve definitely heard of this.

4. N then we officially named the children

5. Yes the tradition continues in our flys
Thank u for sharing

6.We have been doing it always for all new born babies in the family since generations!!

7. My mom did for both my kids…she had also kept new set of clothes with socks n topi..

8. Mine was done. I still have the red pen

9. Yep we all had this including my daughter

11. Never heard of it. But loved reading about it. Definitely sounds borrowed from Hindu culture. We’re moving further and further away from all such rituals as the modern world gives us no time. I mean on Day 6 it’s all about managing the stitches, coaxing out the milk, burping and pooing, dealing with visitors and never sleeping.

13. My Mom did it for both our daughters!

14. Yes my mom did it for me and I for my son. My mom in law had also performed the ceremony for her children and grandchildren. Actually its the Mamaiji who does the rituals. The paper and clothes are to be carefully preserved and never discarded.

15. Yes granny did this for everybody.. However it is totally a hindu ritual to be honest, but totally ok.. Divinity is one, nothing wrong in creating good vibrations and spiritual blessings with our Avesta mantra too..

16. Yes, for both my kids. And practiced this for generations in our family

17. THIS IS BEING DONE SINCE AGES BY PARSIS.

19. My grandmother did it for me and my sister. Even have my chhati nu kapru still.

20. Since ages we are doing this. I still have that special pen with me. My mom did for both my children

21. Yes my mom had dobe for both my sons. I still have that paper and pencil

22. Yes my parents did it for me and my bro and my children. I too got an opportunity to do for my three grandchildren.

23. I did it for my granddaughter. I wrote down all good wishes for the baby and her parents and then my husband and I read them out. Took a new dress, bonnet and a silver rattle and put all that and the good wishes list in a plastic bag and told my daughter to put it away safely. As per my MIL, if there is a court case then this bag should be taken for good luck.

24. Me too….did for all three grandchildren of mine 🥰 and yes my daughters too

26. Angel of destiny…. Vidhatamata
We also. Put a white plain paer, a kitto, a new red colour cloth or a frock or a shirt along with kankoo, chokha ne divo

28. Yes still followed. My sasu did this in addition to all stated above she kept a set of red colored clothes. A full set with socks cap n booties

29. Also a set of handkerchiefs. And also its on this sixth day that the baby’s fui names them. With a small poem
Sry if I m wrong with the words
Aan paan peepal pan
Fui e paryu _____ naam.
In place of the dash the name is said

31. Yes it is followed in all parsee homes. My grand mother and mother would perform this ritual, but with a difference. The mother and child should not even cast their shadow on the diva and the paper and pen, as the mother has to be away as she not as yet completed 40 days after child birth. When we summon the Angel’s who are pure celestial beings then nothing should cross their path which will hinder the way of the angel. Also no Male is supposed to enter the room where the ritual is being done. We call it Chhathi mai na lekh.
The mother can say her prayers privately wishing well for the child. The ritual must be performed after dark.
This is how the ritual is performed as was being done is olden times, but we bring in changes to suit our convenience.
To each their own.
May all babies be blessed with all good things and their destinies bring them loads of happiness and good luck always.

you are spot on. The ritual is usually done by the child’s grandmother.

32. Yes, we have been doing it in our family for generations. Both sets of grandparents did it for our first grandson.

33. Yes, we have been doing it in our family for generations. Both sets of grandparents did it for our first grandson. After my dad passed I found our chatthi clothes in his cupboard…

35. Nice article, but how can the mother do the divo, as she has her periods. Neither can she or her husband pray.
This ceremony is done by the paternal grandmother.
She does everything mentioned in the article.

my dad did it.

36. Yes my mother did it for me and then she did it for my daughter. And after the ceremony officially whispered her name into her ears.

37. Yes I have done it for my brother and sister kids

38. Yes ceremony is performed by the child’s mamai or bapai not mother (as mentioned in the article)as she cant light divo and pray for 40 days..

39. It is so beautiful😇I am a Parsi married to a Hindu and we had very similar rites for our son on the 6th day. We too placed the symbolic red pen for the angels to write his destiny. A diya is lit, paper and pen are placed on a sandli (patlo) and the child is bestowed with his given name which the grand father whispers in the baby’s ears. A ceremony is performed with the mother holding the baby and the child’s footprint is marked out with kumkum.

40. Yes we did chatti ceremony for our kids but an elderly member performs the rituals as mother has to be away from holy rituals and prayers for 40 days.on that day no nonveg cooking is done in house.
A red pen, red ink n new red colour clothes are also placed and prayers are done
Generally we name the baby on that day.

41. Yes I did for my grandchild just 2 months back.

Please comment here and let us know your family stories, folklore. Comments are always welcome and we learn together.