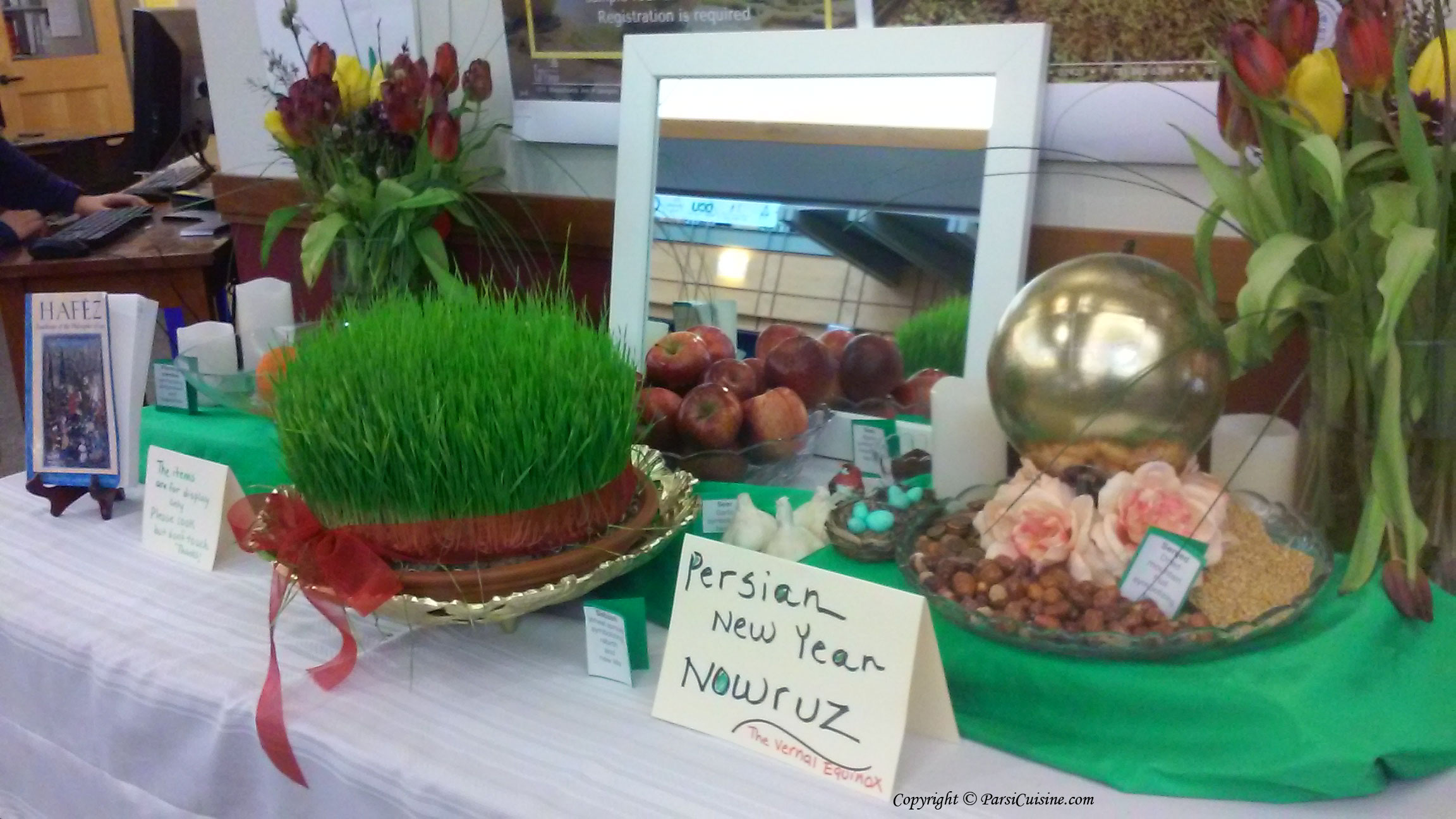 PHOTO: Naurooz / Nawruz table is from a local library exhibit in Lexington MA.

Long long time ago, King Jamsheed of the Iranian Peshdaadiyan Dynasty founded the festival of Naurooz (meaning “new day” in Persian) to celebrate the coming of spring after the cold, dark winter. If you recall that in those times Iran was a pastoral community, and this festival marks the triumph of good over evil with light literally defeating darkness as Naurooz falls on the Vernal Equinox, when night equals day, and subsequently the hours of daylight increase.

History and Practice of Naurooz

Today, Naurooz is celebrated the world over by people influenced by pre-Islamic Iranian culture. What makes Naurooz unique is that it is the only holiday celebrated by several religious communities in various countries.

Among the best-known customs of Naurooz is the Sofreh (spread) Haft-sheen/seen, with seven gifts of Nature with names beginning with the Farsi letter “sheen” or “seen”. A week or so before the holiday, grains of wheat and lentils are placed in bowls to sprout into a mass of greenery, symbolizing growth. The table is also laden with fruit, nuts, sweets and snacks, candles, and the holy book, the Khordeh Avesta for Zoroastrians. A bowl with goldfish and a basket of colored eggs, indicating new life, are also placed on the table. Custom dictates that visitors who come to share the holiday with you should be sprinkled with fragrant rosewater and asked to look into a mirror to make a wish. Some say that this ritual symbolizes that you smell as sweet as roses and shine as bright as a mirror throughout the new year.

The Haft-Sheen table symbolizes the holiday spirit in much the same way the Christmas tree promotes a special festive mood and the table is kept replenished for thirteen days.

To the Zoroastrians, the sixth day is called the “Naurooz Bozorg” or “greater Naurooz” as it is celebrated as the birthday of Holy Zarathushtra.

Nowadays in Iran, the celebrations end on the thirteenth day, Seezdeh Bedaar, with people going for a picnic by streams and rivers. The sprouted lentils are thrown into running water, carrying away the bad luck of the previous year.

(Acknowledgement: Above compiled from various Naurooz writings from Internet)

The Haft-Sheen/Seen spread contains seven specific things together with a number of additional items on the Sofreh that will signify renewal, happiness, wealth, good health or anything that you desire for the New Year.

Here are these items:

This table has items beginning with the Farsi letter “sheen”. This is the original custom of the Iranian Zoroastrians.

This table has items beginning with the Farsi letter “seen”. This is the custom adopted by the Islamic people so as not to include “Sherab” or wine.

1. Samanu – a sweet pudding made from wheat germ, symbolizes wealth.

4. Somaq . special berries that represent the color of the sun rise,

6. Sonbol – the hyacinth flower with its strong fragrance heralds the coming of spring

Hamā Anjuman Prayers for Naurooz In English, Farsi and Gujarati

In 2010, then FEZANA President Rustom Kevala requested a Naurooz Committee to create some Hamaa Anjuman prayers for the whole gathering to pray together during Naurooz days. I was volunteered to create these prayers in a book form in English as well as in Gujarati, and later in Farsi, so all our Humdins can use the book. After a lot of communications with Vadaa Dasturjis, Mobeds, Scholars, we created 8 short prayers for this book, printed it and distributed to all FEZANA Associations who chipped in their share for the cost of printing.

My very good friend, Joseph Peterson, has been publicizing this book in his excellent website: www.avesta.org front page by presenting its front and back covers. (please see their photos attached)

Due to this advertisement in this website, over the years we have many requests for the book and our very efficient FEZANA Admin, Ms. Zenobia Damania, has been sending them requesting a donation to FEZANA. Zenobia informed me that a very few copies are now left.

These short prayers in this book is NOT JUST FOR Navroze. They can be used at any time. And we are making a strong appeal to all our Humdins, teachers, Mobeds and Mobedyars to use one of these prayers before a class or a get together so all Humdins can pray together.

Their encouragements and suggestions made this Prayer Book possible.

Yenghe Haataam Prayer in Farsi, Gujarati and English with Translation

One of the 8 prayers in this Naurooz book is one of our 3 pillars of our religion, Yenghe Haataam. We want to present this short beautiful prayer in Farsi, Gujarati and English with its English translation.

(Please hear the attached .mp3 file for its recitation, together with Yathaa Ahu Vairyo and Ashem Vohu by Marazban Dara Mehta and the Mehta Brothers ensemble)

1. In his scholarly opus: The Divine Songs of Zarathushtra, Dr. Irach Taraporewala points out that Yenghe Haataanm verse is a later version of the original Zarathushtra’s Vohukhshathra Gatha verse Yasna 51.22.

(Please hear the attached .mp3 file for its recitation)

(Zarathushtra says:) I ween whom by reason of his Righteousness

in every act of worship as the best Mazda Ahura doth regard;

both among those who have been and who are;

these will I revere in their own names

and will devotedly reach upto them.

The first half of the Gaathaa verse has been reproduced almost word for word, with only the later changes of grammar and spelling. The second half of the Yenghe-Haataanm is entirely different. The idea of bringing in both men and women is a decided improvement. On the other hand, the last two sentences have been practically omitted and so the later verse Yenghe-Haataanm has lost a great deal of the force and beauty of the original.”

3. This whole paraphrasing of Gatha verse brings up an interesting question:

How many other Gatha verses were paraphrased like the above?

Let me leave this thought with you all!

May the Flame of Fellowship, Love, Charity and Respect for all burn ever eternal in our hearts so we can do HIS work with humility, diligence and eternal enthusiasm!

Atha Jamyaat, Yatha Aafrinaamahi! (May it be so as we wish!)

Parsi Cuisine Cookbooks by Rita Kapadia are available on Amazon.

hi rita
as a persian, let me shed a bit of light on this issue and assist you with the writing/pronunciation of words:
haft sheen or seven ‘sh’ was/is the real thing. since the arab invasion of persia, they forced the masses to adopt haft seen or seven ‘s’ instead, mainly because haft sheen included wine. most people have accepted this and/or are unaware of it.
the haft sheen
1. Sherab . (wine) – it is pronounced and should be written as ‘Sharaab’

3. Sherbet Naranj . (orange juice) -sharbat e naarenje (however this not orange juice at all!)

Thank you. I will be making the edits soon.
Rita