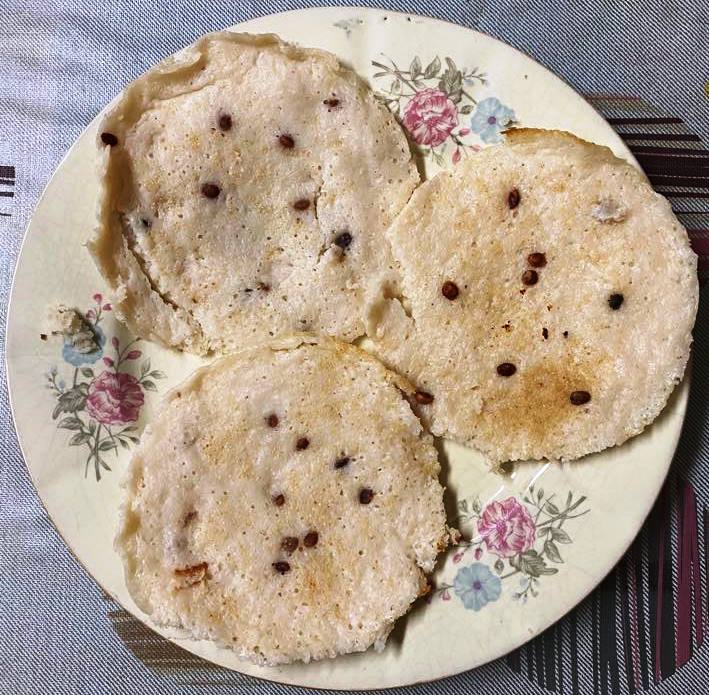 An ancient delicacy. Sandhra are fluffy white pancake like delicacy. They are made from rice flour that is kept to rise. You got to make them to know the taste of bygone days!

Eighteen century Vividh Vani cookbook has the recipe in Gujarati.

Here is the much sought after recipe.

From Cookbook: Parsi Cuisine Manna of the 21st Century: Indian Parsi Cuisine Available as a Kindle or Paperback Edition.
by Rita Kapadia (Author)

Written for today’s generation of cooks and food enthusiasts, the cookbook “Parsi Cuisine Manna of the 21st Century” by Rita Jamshed Kapadia provides a treasure trove of recipes, along with an immersive cultural experience for those seeking to understand this ancient and timeless cuisine of India.

With classical and regional Parsi / Parsee recipes as well as an introduction to Parsi heritage, history, and culture. The book’s full color photographs are intertwined with descriptions of ancient and modern Parsi ceremonies, poetry, folktales, travelogue excerpts and anecdotes.

The ”Parsi Cuisine Manna of the 21st Century” is a labor of love. The book began in an effort to maintain and preserve our recipes and traditions for the next generation, many of whom have been raised in India. Today, as accomplished adults in their own fields Rita’s children encouraged her to write this book for their generation.

What is the purpose of the Onion ?

In Sandra recepie toddy is to be used. If toddy is not available can you suggest the ingredient that can be used as a substitute? Thank you.
How can I buy your book Rita through a courier in Thane, India?

If toddy is not available, yo can use the Tari recipe on this site – http://www.parsicuisine.com/homemade-toddy/.

Also you can use “Khamir” that will be available in bakeries in Mumbai.

Unfortunately because of Covid, you canot get reliable courier service in Thane. Sorry – cannot mail the cookbook and it also gets too expensive.

I am in Boston, USA and cookbooks are printed here. If you have a friend or relative I will be glad to mail it to them in USA.
Best wishes,
Rita