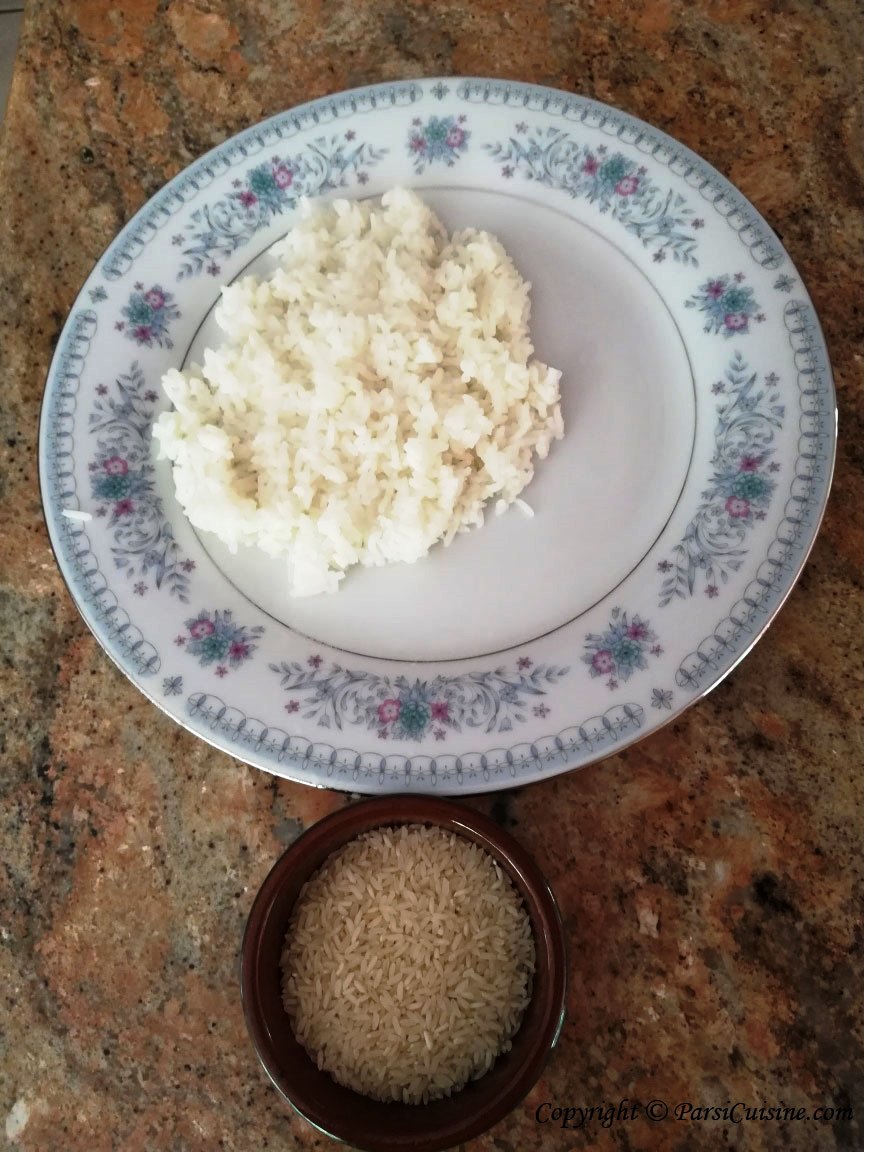 Recently, I went for shopping to my favorite store – Costco. I saw a 20 lb huge bag of Sona Masoori White Rice. and I have never used this, I usually use Basmati Rice which Costco sells as well.

I bought it because I like experimenting! Here is the cooked rice with the inset of the uncooked rice grains:

Sona Masoori is a soft fluffy rice not long grain not so tasty. Basmati has a longer and firmer grain very well suited to Pulaos and Biryanis, retains shape.
Some said it is easy to digest and people can lose weight, this is not a proven fact and please do not take my word for it.

Sona masoori rice in Gujarat is typically used for eating with daal or making khichdi and everyday cooking for lunch and tiffin boxes. Typically a middle class economically priced product.

It did fluff up considerably and guess it is okay for everyday eating. If you want to try – order from Amazon

Thanks everyone and keep the comments coming!

Wash the rice in water. I do this 5 times and then soak rice in water for at least 15 minutes. Drain and use.

In a large pot with a tight fitting cover, add all of the above.
Bring to a rolling boil on high heat.
Lower heat to lowest, cover and cook for exactly 20 minutes.
Try not to open the cover and peek. This will have the steam escape and you will end up with dry rice. Add water, in this case.

Rice can be re-heated in microwave very nicely.
Serve with Curry and enjoy hot.

Add to rice. See Video of benefits on https://youtu.be/SKykcBPA9sQ

PS Diabetics, who miss having rice, will soon have something to cheer about. A low glycemic index (GI) rice variety that goes by RNR-15048 moniker is expected to be released for commercial seed production. It has a low GI of 51. Compared to this, the popular Sona Masuri rice variety registers 72 as its GI.

Higher GI foods are generally not recommended for consumption by diabetics. They can contribute to increase in blood sugar levels and make medical management of diabetes more intensive and sometimes challenging.

The RNR-15048 rice variety was developed after six years of research at Prof Jayashankar Telangana State Agricultural University near here.
This variety of rice has been in production for the past three years, but in limited quantities as the scientists went about establishing the crop’s growth and yields as well as consistency in the GI.
The low GI levels of RNR-15048 have been tested independently by the National Institute of Nutrition and the Indian Institute of Chemical Technology.
“We are awaiting a final approval from the State Level Varietal Approval Committee before introducing this rice variety with a brand name into the seed production chain,” V Praveen Rao, the university registrar told TOI on Tuesday.
Incidentally, a previous rice variety developed by the university some years ago, BPT-5204 popularly known as Samba Masuri, has a low GI of 57 and the new variety is even better with a lower GI and can be attractive for use by those suffering from diabetes, he said.

Normally, a GI of less than 55 is considered low, 56-69 is considered medium and more than 70 is considered high among foods.
“The new variety is ideally suited for regions such as Telangana which do not have assured irrigation as RNR-15048 is a short-duration variety and it’s planting and growth cycle can be managed in tune with availability of water,” Praveen Rao said.
This variety of rice takes 125 days to reach harvest stage and the yields are comparable to other established rice varieties, studies on growing this rice so far have shown.
For the past three years since its introduction to farmers by the university, the area under this variety of low GI rice has reached one lakh acres in the country with Nizamabad district of Telangana topping with 20,000 acres.
“RNR-15048 is also resistant to one of the major rice pests, the Brown Plant Hopper and since it is a short duration crop it also requires lesser inputs in terms of fertilizers and pesticides,” Praveen Rao said.
The Times of India News
Ratan Tata Donation

Featuring my published cookbooks. “Manna of the 21st Century Parsi Cuisine” and other affordable paperbacks and ebooks. If you need assistance, please contact me Rita@ParsiCuisine.com to purchase. Available on Amazon. Thanks - Rita Jamshed Kapadia